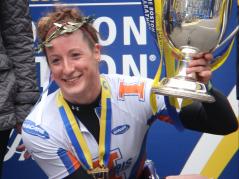 McFadden, 25, wore a singlet in memory of Martin Richard, the eight-year-old boy who was killed in the 2013 finish-line bombing.

McFadden is a four-time Paralympian and the reigning champion of the Chicago, New York City, and London Marathons. She also finished second in the 1-kilometer Nordic skiing sprint in the 2014 Paralympics.

In an earlier interview, third-place winner Scaroni , who graduated in 2014, credited the U of I with having the top wheelchair athletes program in the country, possibly the world.

“I’m at the best place I could be as a wheelchair athlete and as a dietetics major who wants to go into sports nutrition. At the U of I, I’m surrounded by elite wheelchair athletes, and our training schedules are built into our school schedules. It means the world to me,” Scaroni said.

McFadden, who graduated from the U of I in 2013 as a child life specialist, agreed. “At the U of I, a lot of us were Paralympic athletes so it was a great group of people to train with. We pushed each other every day. It’s a lot of fun at practice and prepares you for races like these,” she said.