Expert says that being sleep deprived leads to weight gain, other disorders 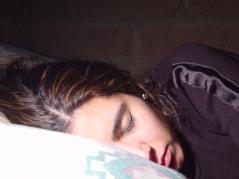 URBANA, Ill. – Almost a third of Americans don’t get enough sleep, and that increases their risk of weight gain, diabetes, hypertension, high cholesterol, heart attack, and stroke, said Michael A. Grandner, an expert in behavioral sleep medicine and the keynote speaker of the University of Illinois’s Division of Nutritional Sciences recent Nutrition Symposium.

Because sleep and diet are both biological imperatives, it’s no surprise that one affects the other, he noted. Inadequate sleep promotes inflammation, which can lead to difficulty regulating insulin and an increase in the hunger hormones leptin and ghrelin.

“Just as we have healthy diet interventions, we should have sleep interventions. But how do you teach people to get better sleep? It’s hard to get people to sleep more. You’re asking them to give up what little autonomy they have left in their lives. They would trade sleep for work or for their commute, but not for leisure, which they don’t want to give up,” Grandner said.

Further, Grandner said that the less sleep people get, the more impaired they are, and they don’t necessarily realize it—so that drowsy driving is a real problem on our highways. The deficits due to sleep loss add up over time, and after two weeks of skimping on sleep, short sleepers don’t adjust, they get worse, he said.

Lack of sleep is associated with high stress, moodiness, and impaired decision making, he said.

“Sleep-deprived people may not be able to discern what is relevant and irrelevant when making decisions, and they are more likely to engage in risky behavior,” he said.

The sleep scholar is also concerned that there is a strong association between food insecurity and sleep difficulties. Problems include difficulty falling asleep, frequent awakenings, and daytime sleepiness. “Hungry people are likely to also be sleep-impaired people,” he said.

Grandner is an instructor in the Department of Psychiatry at the University of Pennsylvania. After earning a Ph.D. in clinical psychology from the joint doctoral program at San Diego State University and the University of California, he completed a postdoctoral fellowship in sleep and circadian neurobiology and a fellowship in behavioral sleep medicine, both at Penn. He has been honored by the Society of Behavioral Sleep Medicine, the Sleep Research Society, and the American Heart Association, and has written extensively about sleep and health.