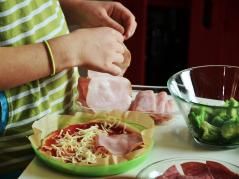 URBANA, Ill. – The preschool age marks a key developmental time period for children to develop food-related behaviors, and getting kids involved with meal planning and preparation can positively influence those behaviors long-term.

Food involvement at age 3 predicts healthier dietary intake at age 4 and could set the stage for healthier food behaviors, according to a new a study authored by Jessica Jarick Metcalfe, a doctoral candidate in the Department of Human Development and Family Studies at the U of I.

In the study, kids who had high levels of food involvement at age 3 ate more fruits and vegetables and less fast food at age 4. “This finding lends support to the notion that food involvement can act as a causal factor to affect positive change in dietary intake,” Metcalfe says.

The study, recently published in Appetite, and co-authored by Barbara Fiese, director of the Family Resiliency Center and professor in the Department of Human Development and Family Studies at the U of I, examined the relationship between “family food involvement” and dietary intake of 3- and 4-year-olds.

The study analyzed data from waves 1 and 2 of the Family Resiliency Center’s STRONG Kids 1 project, a comprehensive study that examines how genetics, environment, and dietary intake contribute to the development of childhood weight, obesity, health behaviors, and health beliefs.

The study found that 3-year-olds who had higher levels of food involvement—participating in meal planning, shopping, and cooking—also ate more fruits and vegetables. The study found similar results for 4-year-old participants but also found a decreased consumption of fast food among those participants.

Data also shows an association with children’s age and gender. Girls were more likely than boys to have high levels of food involvement, and older children tended to have slightly higher food involvement than younger children.

The paper, “Family food involvement is related to healthier dietary intake in preschool-aged children” is published in Appetite and is available online [DOI: 10.1016/j.appet.2018.03.021].  Co-authors include Jessica Metcalfe and Barbara Fiese.

Jessica Jarick Metcalfe was supported by the Agriculture and Food Research Initiative of the USDA National Institute of Food and Agriculture under the Illinois Transdisciplinary Obesity Prevention Program grant (2011-67001-30101) to the Division of Nutritional Sciences at the University of Illinois.