Future of children in the U.S. trending #hungry 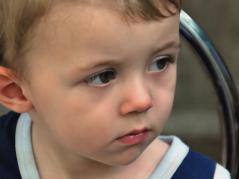 URBANA, Ill. –Alleviating food insecurity in the United States is one of the leading challenges facing our country today.  The magnitude is great, especially among children—nearly 16 million U.S. children, or over one in five, live in households that were food insecure.  In other words, according to the U.S. Department of Agriculture, these children live in households that do not have access to adequate food due to lack of money or other financial resources. University of Illinois’s Craig Gundersen and University of Kentucky’s James Ziliak recently released a review of research on the subject that includes recommendations for the next steps needed to reduce the number of food-insecure children in the United States.

“One of the reasons that food insecurity remains high is that we don’t fully understand what causes it, particularly among children,” said Gundersen, Soybean Industry Endowed Professor in Agricultural Strategy and professor in the Department Agricultural and Consumer Economics. “For example, we know that greater income lowers the risk of being food insecure, but even at incomes two and three times the poverty level, there are children in food-insecure households. Clearly there are numerous other factors besides income that determine whether a household is food insecure.”

Gundersen and Ziliak summarized some of the main factors that they observed in research that contribute to childhood food insecurity. Some of the prominent themes related to: mental and physical health of the mother; family structure, such as if the child lives in a home with both biological parents and/or with extended family members; child-care arrangements; and certain at-risk populations, including immigrants and children with a parent who is in prison.

The report ends with a discussion of some of the federal assistance programs, such as the Supplemental Nutrition Assistance Program (SNAP). “A high proportion of eligible children do not receive free or reduced price meals through the National School Lunch Program,” Gundersen said. “This is often ascribed to the stigma that some children face for receiving the meals or their dissatisfaction with the meals, which is especially true for high-school children.”

In addition, Gundersen noted that in many communities feeding programs for children are not available during the summer when school is not in session. This may be one of the reasons that food insecurity among children tends to spike during the summer.

“One way to improve the rate at which people apply for these federal programs is to improve access to the programs,” Gundersen said. “If the office hours are only during the day, parents are forced to choose between missing work and the corresponding wages or failing to enroll in SNAP.” He suggested that perhaps counties could be rewarded for increasing participation rates among eligible households.

The report also suggests that the benefit levels of SNAP be reexamined because, for example, food costs are not uniform across the country.

“We have learned a great deal from existing research, but we need to learn more about what is causing food insecurity in the first place,” Gundersen said. “For instance, we know that households with at least one person with a disability are substantially more likely to be food insecure than other households, but why?”

In addition to quantitative data, Gundersen said that research could benefit from more personal interviews with a richer set of questions and multiple approaches to interpreting the responses.  “A more personal approach would yield information about the coping mechanisms that families use when their food resources are exhausted, the triggers to food insecurity, the hurdles people may face when they apply for food assistance, and how disabilities make it harder to procure and prepare food.”  Along with this qualitative data, Gundersen recommends having longer-term longitudinal surveys which interview individuals over multiple years.

The report entitled “Childhood food insecurity in the U.S.: Trends, causes, and policy options” was co-authored by U of I’s Gundersen, who is also the executive director of the National Soybean Research Laboratory at Illinois, and James P. Ziliak from the University of Kentucky. It is published in the fall 2014 issue of The Future of Children journal. Funding for this work was provided by the U.S. Department of Agriculture, Food, and Nutrition Service.