In a negative emotional climate, romantic partners may miss attempts to warm things up! 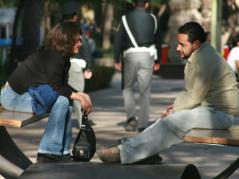 URBANA, Ill. –A new University of Illinois study reports that when conflict occurs in romantic relationships, the negative emotional climate that results hinders a person’s ability to recognize their partner’s attempts to reach out to them.

“When we evaluate relationship maintenance in couples, the important measure is not what’s actually happening in the relationship but how those persons perceive their partner’s efforts. That perception creates the climate in which attempts at reconciliation will either be accepted or rebuffed,” said Brian Ogolsky, a U of I professor of human development and family studies.

After an argument, in a newly chilly emotional climate, communication styles can be very important, he noted.

For the study, 98 same-sex couples kept a 14-day diary in which they recorded conflict and answered questions about how they had responded to it. For example, did they withdraw? Did they lash out? Did they blame the other person? Did they threaten to leave?

Or did they take a more positive approach? Did they persist in their attempts to communicate? Did they prioritize solving the problem? Answers to these questions predicted whether they were able to recognize that their partner was attempting to mend the relationship.

“When conflict occurred, it influenced the way persons rated their partner’s general efforts to work on their relationship. If partners withdrew or become contemptuous or critical, the bad feelings lingered, and that negative emotion dampened people’s ability to process or perceive their partner’s attempts to repair what was wrong between them,” Ogolsky said.

Some couples use conflict resolution strategies that cause those bad feelings to dissipate, he said.

“Hostile feelings don’t gain a foothold among constructive communicators—people who talk things out and work through the problem in a constructive manner. That’s a game changer for the way a couple’s relationship will develop,” he noted.

Good problem solvers are able to engage with each other in the moment of conflict or shortly thereafter, he said.

“Taking a moment to regroup and gather your thoughts is never a bad thing, but be careful that the moment you take doesn’t turn into a longer period of avoidance, which allows the problem to fester,” Ogolsky said.

The study showed that people with constructive communication styles tend to form relationships with partners who are also good communicators.

“Communication is just one aspect of relationship maintenance, but it’s an important one,” he said. “If you use effective strategies to manage conflicts on a daily basis when those conflicts are small, you’re likely to create a warmer emotional climate and have better outcomes.

“Conflict, Negative Emotion, and Reports of Partners’ Relationship Maintenance in Same-Sex Couples” appears in the Journal of Family Psychology and is available pre-publication online. Brian G. Ogolsky of the University of Illinois at Urbana-Champaign and Christine R. Gray of Texas State University co-authored the article. A USDA grant funded the study.