Tax credit paid in advance over the year vs. lump sum lessens stress and depression for low-income families 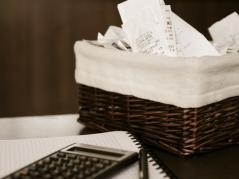 URBANA, Ill. – Financial stress is a strong predictor of psychological distress, particularly of depression. A new study from researchers at the University of Illinois, led by associate professor of kinesiology and community health Flávia Andrade, finds that for low-income families in the United States, receiving the annual Earned Income Tax Credit (EITC) in advance payments throughout the year may help alleviate some of the economic strain they face, in turn, lessening depressive symptoms.

The idea is when families have the money they need, when they need it, they feel less stress—feeling the need to borrow money or not having enough to eat—and therefore less depressed.

The EITC has traditionally been delivered in one lump sum to working families once a year as part of the federal tax refund. Factors such how many children are in the family determine the amount of money each family should receive.

“It’s a lump sum, but these families need this money over the year,” explains Karen Kramer, an assistant professor of family studies at U of I, and a co-author of the paper. “They need to pay their everyday life expenses and bills—car repairs, phone bills, electricity. If they don’t have it, they must get loans, and that costs money, which brings about a lot of financial stress.”

Given the strong link that has been established between the economic strain families are facing and mental health, researchers on the study were interested in looking at whether the EITC intervention could help families.

In 2014-2015, the City of Chicago piloted a field experiment called the Chicago Earned Income Tax Credit Periodic Payment Pilot. For the program, participants in an intervention group received 50 percent of their projected 2015 tax credit over three time periods, and the remaining sum after their taxes were filed. Participants in a control group received the traditional lump sum with their annual tax refund. Data was collected across four waves.

The researchers had determined how participants would receive their payments, and then evaluated the experiment, especially looking at whether the advanced payments had any association with the participants’ perceived depressive symptoms during the third and fourth waves. To assess this, they used established questionnaires to determine, on a scale, symptoms of depression, as well as levels of financial distress or financial well-being.

The researchers also asked questions such as whether participants had to borrow money from friends or family during the previous 30 days, or if they felt food secure during the time frame.

The intervention group—those receiving advanced payments—started the experiment with a higher level of financial stress than the control group, but stress levels dropped as the year went on. The control group—those receiving a lump sum with their tax return—started with lower levels of stress, but stress levels increased and remained high throughout the year.

Results also indicated that those in the advanced payment group were reporting significantly lower levels of depressive symptoms during the third and fourth waves of the intervention, showing an association with lower levels of financial stress.

“The study shows that it’s a much healthier way for those who got the advanced payments over the year,” Kramer adds.

Breaking up the EITC in payments is not a new concept. For a time, eligible recipients of the tax credit could receive small payments throughout the year in each of their paychecks. But Kramer says participants, for the most part, did not take advantage of this option and this payment program was terminated in 2010.

“When you divide this lump sum over 12 months or bi-weekly, that made the proportions very small in their paychecks, and they weren’t even aware that they were receiving a significant amount of money. For them, it felt like the money was disappearing, as opposed to a sum that was saved for them at the end,” Kramer says.

Getting the results of the Chicago intervention in front of policymakers might make a big difference for low-income families. “The EITC is already a great policy, but there are ways to improve it without changing much of the policy, in terms of how much it would cost,” Kramer says. “It would not cost much to provide this additional way for families to receive the money.

“It might give an opportunity to improve the well-being of lower-income families over the year, in terms of financial stress, mental health, and food insecurity.”

Because the Chicago intervention predominantly included African American mothers, Kramer says she would like to see other demographics of low-income families included in future studies.

The paper, “Financial stress and depressive symptoms: The impact of an intervention of the Chicago Earned Income Tax Periodic Payment,” is published in the journal Public Health. [DOI:  10.1016/j.puhe.2017.08.017]. Co-authors include F.C.D. Andrade, K.Z. Kramer, J.K. Monk, A.J. Greenlee, and R. Mendenhall. Karen Kramer is an assistant professor in the Department of Human Development and Family Studies in the College of Agricultural, Consumer and Environmental Sciences at U of I.

The Chicago EITC Periodic Payment Pilot was supported by the Chicago Housing Authority and the City of Chicago Office of the Mayor (grant C3846). This research was also supported by a University of Illinois Research Board grant and by the Richard and Margaret Romano Professorial Scholarship.