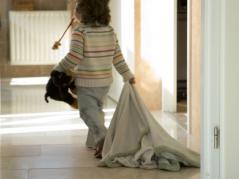 URBANA, Ill. – A new University of Illinois study reveals that the transition from home to child care is an important time for creating a partnership between parent and provider that benefits the child’s development.

In this mixed-methods study, researchers at the U of I report that several factors—including the child’s age, child temperament, and maternal depressive symptoms—may play a role in the ease or difficulty that mothers and their young children experience during the transition into child care.

“Finding child care outside of the immediate family can be an emotional process,” says Nancy McElwain, an associate professor of human development and family studies. “We wanted to understand, from the perspective of moms, what challenges they and their children face when transitioning to a new care setting. We also wanted to know, again from the mom’s perspective, how providers may help families during these transitions.”

Rebecca Swartz, an early learning specialist with the Early Care and Parenting Collaborative at the U of I, and lead author of the study, says that having a strong connection with the child-care provider that began at the time of the transition or before the child’s first day made a big difference to mothers who participated in the study.

“That warm hello by the provider is really important in setting the tone for the relationship,” Swartz says

Swartz encourages providers to pay special attention to building relationships with families. “If parents bring their child to the center so they can get acquainted before they start care, it eases the transition,” she notes.

The researchers conducted semi-structured interviews with 65 mothers of 18- to 36-month-old children about their own and their child’s ease in transitioning from home to non-parental care. Mothers generally had a more difficult time with the transition than their children did, and mothers whose children had a difficult adjustment reported that they also had a difficult transition.

“For mothers, an easy transition was characterized by their comfort with the provider and the idea of returning to work, and also by the ability to exercise some control over when they returned to work and how many hours they would work,” says Kate Speirs, a U of I postdoctoral research associate and co-author of the study.

“When mothers valued being able to return to work or their child spending time in early care and education, that helped make the transition easier,” Speirs says.

Swartz adds, “Moms who reported some level of depression or having a difficult time coping with other people’s emotions, including their children’s distress, indicated that the transition was difficult for them,” Swartz said.

Just over 20 percent of moms experience some level of postnatal depression in the year following their child’s birth, and depression also affects dads. The researchers suggest that providers and programs think of the whole family’s experience to best help children make a smooth transition to non-parental care. “If a child is having problems or the teacher is having trouble communicating with parents, that family may need extra support from the provider during the transition period,” Swartz notes.

Children’s temperament mattered in a successful transition, as well, with socially fearful kids having a harder time adjusting to the new environment, she adds.

Early child care programs in the United States might also look to effective transition practices and policies in other countries. Swartz, who has visited child-care centers in Italy, said that Italian centers used photos of children and families placed at children’s eye level so children can “connect” with their parent throughout the day.

“When the child is looking at the photo, the teacher can say, ‘oh, maybe you miss them.’ Then the teacher is able to say to the mother, ‘your child missed you too. We were looking at your picture, and we talked about where you were, that you were at work.’ Those photos in the center may be reassuring to parents and give them a feeling of connection to the care setting,” she says.

The authors were inspired by practices in New Zealand, where the ministry of education stresses the idea of the families feeling a sense of belonging at the center. “There they believe that parents and the child-care center staff are partners in supporting children’s development. They use the term te whariki, which means a woven mat. They imagine that the intentions of the parent for the child and the efforts of the center will be woven together to make a strong foundation for the child,” Swartz says.

Managing transitions well means that a child is secure and ready for new experiences, the researchers say.

“We know that from birth to age three is a critical time for children’s development. If they have a secure foundation, they’ll be ready and able to learn when they start school. If a child is continuously stressed and anxious, she won’t grow as much, learn as much, explore as much,” Swartz explains.

“A Mixed Methods Investigation of Maternal Perspectives on Transition Experiences in Early Care and Education” is available online in Early Education and Development. Co-authors of the study are Rebecca Anne Swartz, Katherine Elizabeth Speirs, and Nancy McElwain of the University of Illinois, and Amy Johnson Encinger of the University of Nebraska–Lincoln. The U of I’s Family Resiliency Center funded the study.